Irish Times
COVER STORY: A part-time vampire, DJ and receptionist in ‘The Clinic’, Aidan Turner’s star is in the ascendant. FIONA MCCANNmeets the yound Irish actor in London
IT’S EASY TO spot Aidan Turner, even in a hotel full of movie stars. He strides through the lobby of the Soho Hotel on the same day the big guns are in to promote a long-awaited Hollywood flick. The place is crawling with celebrities, and still all eyes are on this tall, dark and – you’ve guessed it – handsome Irishman, with his mop of Heathcliff hair and eyes the colour of mahogany. 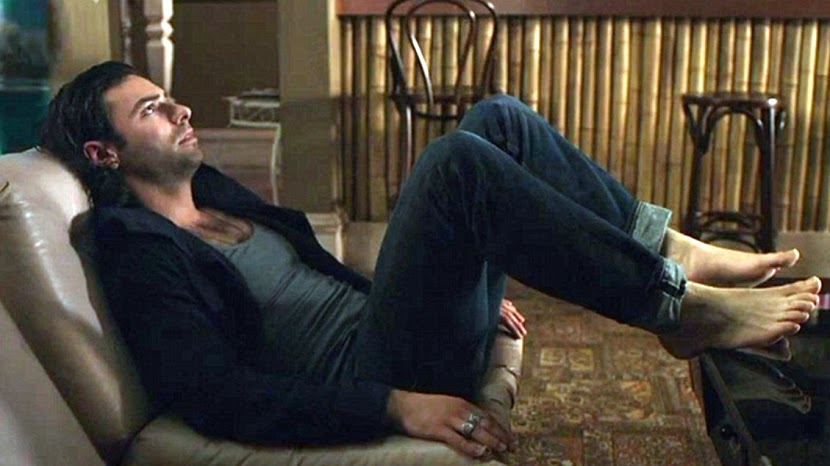 Turner looks every inch the movie star, which is why it’s so refreshing to find he’s as star-struck as everyone else. The first thing he tells me, with obvious glee, is that Tom Waits just passed him by on his way in, although he was too polite to greet him. Teenage girls across Britain are not showing the same restraint when it comes to the Irish actor: his recent turn as a heart-throb vampire in the BBC series Being Humanhas garnered him a serious following. “It’s just all people who want to meet [my character] Mitchell,” he says, as if to underplay his newfound celebrity. “They’re all so lovely and supportive about the show.”

So, sorry to disappoint you ladies, but the brooding badboy looks appear to be hiding a genuinely nice guy. A nice guy in hot demand, as it turns out. He’s currently filming the third season of Being Human, as well as appearing on screens at home as Ruari, the new receptionist in The Clinic, having also showed up this summer in another BBC Two six-part series, Desperate Romantics, in which he played pre-Raphaelite painter Dante Gabriel Rossetti.

Painter, vampire, DJ/receptionist: doesn’t it get confusing, switching between roles? “It was kind of weird between doing Desperate Romantics, playing Rossetti, doing that for like 17 weeks, every day and then – literally, I had a Sunday off – coming back Monday morning and, first thing, I was in The Clinicreception with Daisy walking in.” He grins and all eyes in the room flick briefly in his direction, as if a camera flash has gone off. “That was a bit crazy.”

So how does he get out of one character and into the other with such a quick turnover? “It’s not that hard,” he says with admirable frankness. “You don’t do this whole thing where you shake down and say ‘I need some space to get into my character’.” He does a quick impression of an actor taking himself a tad to seriously. “‘Hello, Clarence Street Clinic, what time do you want your meeting at?’” Pause. “‘Hang on, give me a second to get my character.’” Another pause, while he takes a mock deep breath. “Now I’m in.”
It’s not that Turner doesn’t take his craft seriously: he did, after all, spend two years studying at the Gaiety School of Acting, although he admits that came about almost by accident. “I came to the end of doing my Leaving Cert and I just didn’t know what I wanted to do. It was about deducing what I didn’t want to do basically, which was just about everything.”
Yet for a man who was just giving it a go, he has managed to find near constant employment as an actor ever since. “I feel like a phony sometimes. I went to drama school and I’m one of two of us from the class who have worked since. There was a time that I thought I don’t deserve this like other people do, because I know people that went to youth drama schools and all their lives wanted to be an actor, and I kind of just slotted in, and now I’m making a living from it.”

Being easy on the eye must have helped. “No matter how talented you are, or how much you understand what you’re doing, it’s the business that casting directors and directors and producers look at you, and before they know what country you’re from, what language you speak, they just want the look of you,” he admits, although he adds that it doesn’t always work to his advantage. “It closes a lot of doors as well. People take you a lot less seriously sometimes, and you have to prove yourself more.”
Yet it clearly hasn’t halted this Clondalkin native’s steady rise, and it seems Turner’s star is only beginning its ascent. An American agent has recently been secured, and scripts are arriving on his doorstep. Next stop Hollywood?

“Everyone wants to be in at least one of those popcorn movies where the budget is the debt of a small country, and everything is huge and spectacular,” he admits. “I think that would get old very quickly, but I’d just love to experience it.”

Still, there are times when he takes stock and realises just how strange his chosen profession can become. “Sometimes you’re in the middle of a scene, or just finished one, and you think: ‘This is my job. It’s so weird. I’m in these clothes I’d never wear . . . there are lights on me, and all these people who take it so seriously, and every second is costing so much money to make.’”

There is no fear of it going to his head too quickly, however. As Turner sees it, being Irish helps him guard against developing ‘notions’. “Playing a vampire on a TV show for BBC Three and trying to walk around with your head held incredibly high about the art you’re making is just not going to go down well,” he says. “You know you just have to find it fun, and I guess being Irish has allowed me to do that.”

He has no intentions of being suckered in by his own incipient celebrity. Nor, he assures me, is he the next Colin Farrell, at least when it comes to the latter’s off-screen shenanigans. Not a bad boy, then? “Not that you guys are ever going to know about,” he says, with a decidedly wicked smile. “I don’t think you’re going to find me falling out of the Groucho.”

Family and friends have helped him keep his feet on the ground, too, although his busy schedule keeps him away from home a lot these days. Speaking of which, where is home these days? “I’m based in London now, although I have no place in London. I’m just kind of based there,” he laughs. “I’m pretty much homeless at the moment.”
Until his run with Being Humanends at the end of this year, that is. And then? “Then it’s world domination,” he jokes. “I won’t need a flat for that.”