Ross Poldark’s affections may flit between Demelza and Elizabeth, but Aidan Turner only has one true love on set – his trusted steed, Seamus
By Alexia Skinitis Radio Times 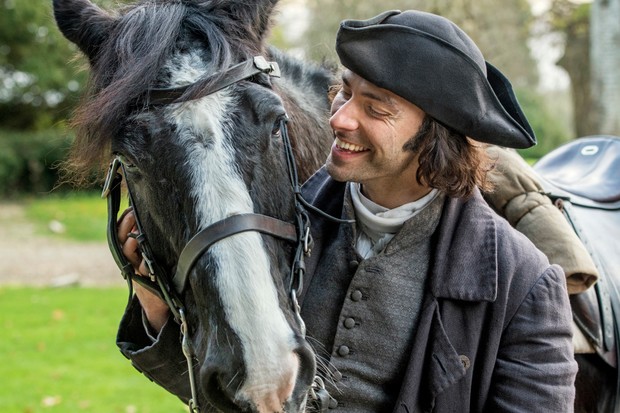 Everyone stand very still and stay silent,” whispers an assistant director on the set of Poldark. “You don’t want to spook the horse while Aidan’s on it…” You certainly wouldn’t! But Aidan Turner’s trusted horse, Seamus, looks hard to spook.

Thirty seconds later, he breaks into a thunderous canter along the approach to Trenwith (actually Chavenage House in Tetbury, Gloucestershire), with Aidan swinging his reins from side to side encouraging him along.

Between takes for the new series, Aidan casually slumps back on the horse that has starred alongside (technically, beneath) him from the first episode in 2015. “I’m so happy to be reunited with him,” he grins, patting Seamus affectionately. “I haven’t seen him since Cornwall.”

Once back in position, they’re off again down the drive, pulling to an abrupt stop at the entrance to the manor house, where, just out of sight, Seamus’s owner and trainer, Mark Atkinson, is waiting to grab the reins as Poldark disappears inside. Back in the stables Aidan and Mark talk to RT about finding the perfect horse, keeping away from those Cornwall cliff edges and which cast member is the best rider on set.

Aidan on Seamus
>When I first went up to Yorkshire to choose a horse, Seamus wasn’t my favourite. Initially, I preferred a horse called Jonny Wilkinson because he’s a lot bigger and quite a goer. The two of us together made Mark quite nervous, so he persuaded me to go with Seamus.

Cleverly, he said, “You look great on Jonny, but you look better on Seamus – he’s smaller, so he makes you look bigger.” I immediately switched horse! He certainly knew what to say to convince me. I’m glad he did, because Seamus is a pro.

When you’re filming with a horse and putting your life into his hands, you have to trust him and I completely trust Seamus. He is so experienced – his CV is probably better than mine! He’s a big celebrity these days. Famous Seamus!

Mark says I’m soppy with him and I suppose I do pet and hug him a lot. And sleep on him. Between scenes I sometimes have a snooze. We really are close, and I guess Mark doesn’t like that because Seamus is meant to be working.

I think we have a similar personality, you know? And we’re both Irish… Seamus is from Cork, and Mark says that he reacts to my accent, which would make sense. My dad’s side of the family were from Westmeath, which is north of Dublin. Proper countryside, so they were always riding. Mum’s side, not as much, because they were city folk and I grew up in the city. But I’ve always loved animals. We had a golden lab called Goldie when I was a kid and I did a bit of riding.

There were also bits of riding when I was in The Hobbit, but nothing major. So when I took this job I had to get very good, really quick. But there’s nothing like the pressure of having to fake it! I didn’t have time for Seamus to call me out as a rookie.

Two weeks before filming started we did an intensive ten days in Yorkshire, riding all day, every day, which is where I met Eleanor [Tomlinson, who plays Demelza] for the first time. She’s a brilliant rider. Her dad [Malcolm Tomlinson] is a racing commentator and she grew up around horses. She rides side-saddle on a gallop and in a race beats me every time. So yes, she’s the best rider on set… So much for Poldark saving his damsel in distress – in reality it’s more than likely the other way around!

Learning to ride like Ross took a while because he’d have been on a horse before he could walk, and then in the Army he’d have been “posting” in the right way – shoulders back, very straight, heels down, using a crop. I’ve loosened him up a little. I think when he got back from the war, he’d have been like, “Oh, let’s have a bit of fun
now.” I feel relaxed on Seamus, so I don’t always want to follow the rules. 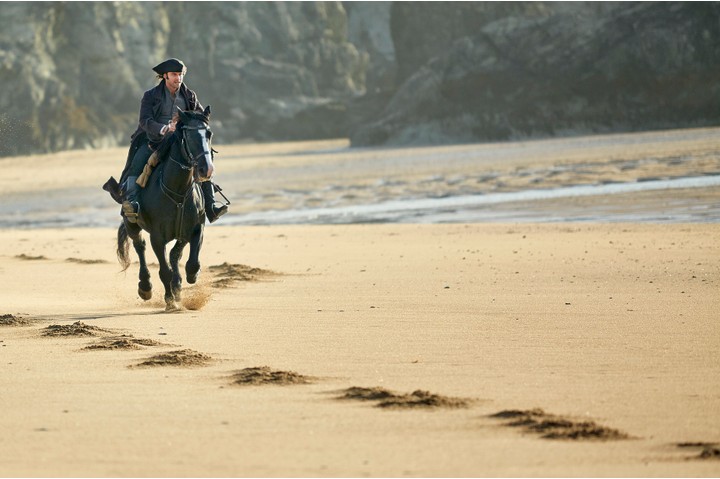 I’ve developed some bad riding habits, like swinging the reins from side to side to get Seamus going – that’s the old cowboy style. But I don’t do it for effect. Sometimes he does need to feel the rein to push on a bit more. I don’t like carrying the crop – it gets in the way and when I jump off the horse and walk into somewhere, it’s another prop I have to get rid of or hold for a whole scene. But maybe my technique has become a little lazy.

I might also take some risks that could scare Mark… There have been times when it’s been raining and Seamus doesn’t want to slow down, he takes a bend and I can feel him slip. But you go with the glide and you just take it up again. Obviously, I can’t wear a helmet – that’s why the trust between me and Seamus is vital.

My favourite scenes with him are the ones galloping down the beach. It’s so much fun, racing beside the quad bikes with the cameramen in them. It also feels a lot safer than being on the side of a cliff! In the early days that did make me nervous, but Mark was like, “Seamus doesn’t want to die, either.” You just pray you don’t have a freak accident because he’s an animal and I’m pushing him all the way… I could play it safe but where’s the fun in that?

For the first series, Mark’s son Ben was my riding stunt double, but back then I was new and less experienced. Now I do it all, unless we need to double up and shoot two scenes at the same time.

Seamus has two doubles – Jonny Wilkinson and Mojo, a smaller horse I’m not a huge fan of as he’s not as fast, or as big. It’s important to have them there though, if Seamus ever gets tired and needs a break – which happens when we’re doing lots of takes on the beach or uphill. But I don’t like riding other horses – I mean Seamus would literally gallop through fire for me – although when it came to it, they wouldn’t actually let us do it…

But don’t show him a puddle! He’ll come to an abrupt halt and dance around it. You can shoot at him, bombs can go off beside him and it doesn’t rattle him at all. But he’ll throw you off the back of him for a little water.

I do miss riding between series, but because I’m used to taking risks on Seamus, I’m worried I might push myself on a horse that I’m not familiar with, so I tend not to. Even in this series, there was a little bit less riding in Cornwall because Ross was in London, and I felt it. If you’re reading this, Debbie [Horsfield, Poldark’s writer]… next series: more riding, less House of Commons, please! Because I don’t know if anything will ever beat riding along that beach for me.

The trainer’s story
When it came to picking a horse for Aidan in Poldark [says horse trainer Mark Atkinson], we read the books, read the script and liaised with the art department. They were keen that he looked like a utility animal that could pull a plough if needed and could cope with the rough terrain in Cornwall at that time – a Defender, not a Ferrari.

We selected five horses for Aidan to try, eventually got it down to two, and then decided on Seamus. Aidan actually preferred another horse, Jonny Wilkinson, because he was bigger – Seamus is 15.3 hands to Jonny’s 17 hands – and quicker. But he looked more relaxed on Seamus and I managed to persuade him.

Seamus was born in Ireland, he’s an Irish draught. That’s why, I think, he really likes Aidan. He’ll lift his head and prick his ears when he hears Aidan’s voice. And Aidan is so soppy with him, he’s always hugging him and patting him. They’re two of a kind.

People often ask me how many more series Seamus can do, but he’s only 16, which isn’t old. Horses work into their mid-20s. Principal horses get better with experience. What’s most important is to have a patient, safe horse. You’re only as good as your last day’s work on set – if anything goes wrong, the whole industry hears about it right away. It needs to be a horse happy to travel long distances, go into a new stable, have his tea and go to sleep. Which Seamus can – mainly because he’s greedy! He can never have a treat on set. Nobody can eat sweets near him.

But Seamus really comes alive when the cameras start rolling. He can go from standing to gallop incredibly fast, and the more special effects there are, the better; he’s done work in front of wind machines propelled by jet engines, blowing leaves into his face. We did a scene at the end of series two where a barricade was on fire, and it would have been great if Aidan could’ve come galloping through it, but it was too dangerous – you couldn’t put your lead horse and your lead actor through that. But I had a sneaky try and he did it straightaway.

Jonny Wilkinson is the main stunt double for Seamus and occasionally Aidan will use him for a scene. We were filming uphill on the moors this series, and Aidan used Jonny for a couple of takes because Seamus was getting tired. But 95 per cent of this series was Seamus, and Aidan did all of the riding.

Between filming, we have a group of ladies called Happy Housewives, who have the horses on loan. It’s their job to pamper and look after them. Seamus’s lady is called Helen, and she really spoils him. He does make cameos in other productions, but he is Ross Poldark’s horse.

How much is Seamus worth? I don’t really want to answer that because to me he’s worth a fortune, but to anyone else he’s just a horse. I’ve heard Aidan say in interviews that his favourite days are those with Seamus, which is very gratifying. He’s made Seamus famous, and Seamus has taken me along for the ride. I’ve never owned a horse with its own Twitter and Facebook accounts!