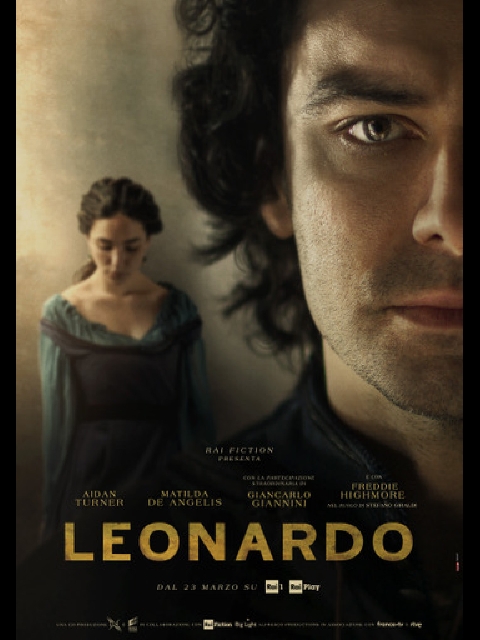 With the release of this new Italian poster for Leonardo, I missed the change in release date at first. I’ve since found other stories mentioning a release date of 23 March instead of 15 March on Italian Rai. The show is still scheduled to run in four 2 hour airings. There will be two separate episodes per night for a total of 8 episodes.

* PLEASE NOTE: We still have no other distribution details for any other countries*

The following is a translation from an Italian news source:
(ANSA) – ROME, FEBRUARY 24 – The event series, created by Frank Spotnitz and Steve Thompson, directed by Dan Percival and Alexis Sweet, will be broadcast on Tuesday 23 March in a world premiere on Rai1 in 8 episodes. A Lux Vide and Sony Pictures Television co-production in collaboration with Rai Fiction, Big Light Productions, in association with France Télévision, RTVE and Alfresco Pictures, distributed by Sony Pictures Television. In the cast, together with Aidan Turner (Poldark, The Hobbit), who plays Leonardo Da Vinci, Giancarlo Giannini is Andrea del Verrocchio, Leonardo’s teacher; Matilda De Angelis is Caterina da Cremona, the mysterious muse and closest friend; Freddie Highmore is Stefano Giraldi, a young investigator of the Podestà charged with solving the mystery at the center of the story; Carlos Cuevas is Salaì, Leonardo’s apprentice and trusted friend and James D’Arcy plays the role of Ludovico Sforza known as il Moro. The TV series tells in eight episodes / four evenings, shot entirely in English, the story of a genius whose complex and enigmatic personality still remains a compelling secret today. The Leonardo event series was shot in over 50 locations – between indoors and outdoors – mainly in Lazio and involved about 500 employees. Over 1900 working hours, 3000 extras and 2500 costumes used. Illegitimate son of a notary, Leonardo lived a lonely childhood in the rural town of Vinci, in Tuscany, driven by a deep need for research and discovery. With tireless curiosity, Leonardo ranges between art, science and technology, infusing each discipline with a deep and courageous humanity, freeing them from the conventions of time, driven by an intense desire to reveal the secrets of the world around him. The series tells the mystery of man beyond genius, through an unedited and original story, made of intrigue and passion, which delves deeply into a complex and enigmatic personality, revealing its extraordinary modernity and very deep humanity. (HANDLE).Source