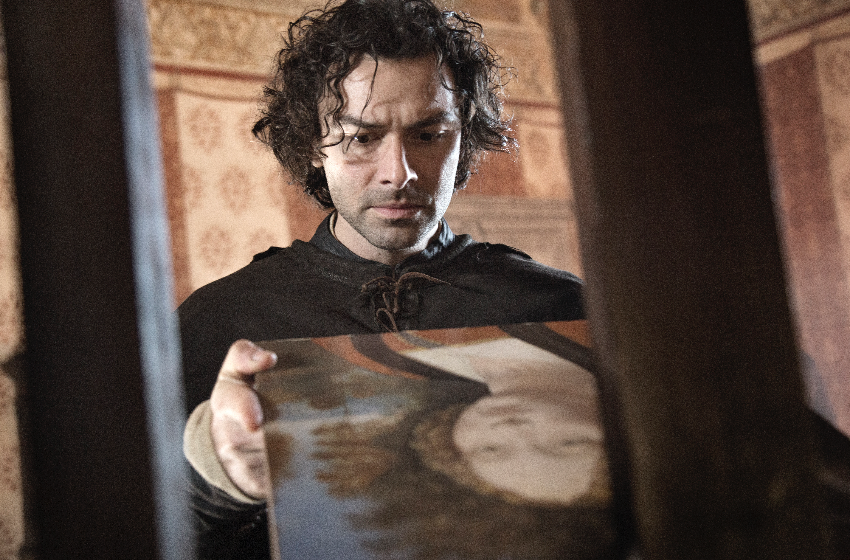 Irish actor Aidan Turner says one of the hardest parts of playing Leonardo da Vinci in a blockbuster new TV series was learning to paint with his left hand.

The Poldark attended an artists’ boot camp supervised by professionals before taking up the role of the creative genius in the eight-part Leonardo.

“I realised I had to get good quite quickly and look like I knew what I was doing with my left hand, which is more difficult than you would think,” he said.

“It’s keeping it steady – you find it just moves around a lot. Leonardo was very slow and precise – I think I got it down.

“After a few weeks you start picking up the brush with your left hand, it becomes natural.”

The 37-year-old heartthrob compared it to learning to ride a horse for the Poldark series, which he pretended he knew how to do before going on a crash course when he got the part.

Turner’s research for Leonardo included a private view of an exhibition of the artist’s work.

“I spent some time alone with the actual paintings, which was brilliant,” he told UK paper The Times.

“They’re just like high-definition photographs. I couldn’t wrap my head around the fact that a human had done this.”
Leonardo premiered in the artist’s native Italy last month and attracted a huge audience of seven million. It can be seen in Ireland on Amazon from April 16.

Former star of The Clinic and Being Human, Turner revealed that he was currently in Canada where both he and his new wife, American actress Caitlin FitzGerald, were filming.

They met while working on the 2018 film The Man Who Killed Hitler and Then the Bigfoot and married secretly in Italy in August after filming on Leonardo finished.

His 37-year-old wife is shooting a series, Station Eleven, in Toronto while Turner works on another project in the city that he’s not allowed to talk about.
In Leonardo Turner plays the artist as gay which involves his first ever screen scene of kissing a man.

“In a lot of ways it was just another love scene. The fact that the gender was different – that was never a thing,” he said.

“No, it felt right. It didn’t feel any different at all.”

Each episode of Leonardo is themed around the story of a different masterpiece, from the portrait of Ginevra de’ Benci to The Last Supper to the Mona Lisa.

The star said he will next appear as the apostle Andrew in The Last Planet, a forthcoming biblical epic from Terrence Malick, revered director of The Thin Red Line and The Tree of Life.

With a cast including Ben Kingsley and Mark Rylance as Satan, the movie is meant to tell the story of Jesus through a series of parables.

Turner also said he would not rule out starring in a future series of Poldark, the role which made him a household name, but wouldn’t want to play him as an old man.
“I don’t know if I’d be keen on the ageing-up thing. It never really works,” he said.

“There’s the possibility someday, maybe. I enjoyed working with everybody on Poldark, from the writers right down to all the cast and crew.

“It really is like a family. So I’d be open to chat about it. But not for a while.”