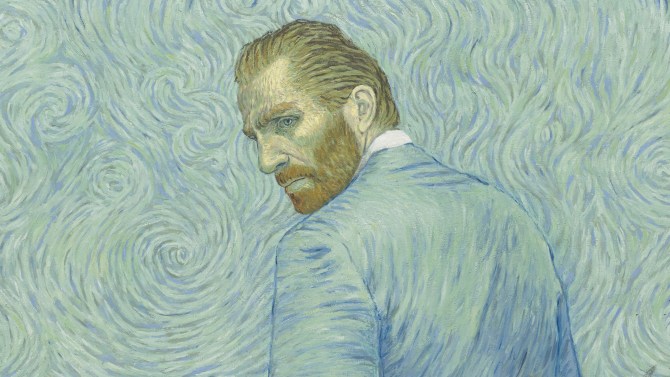 “Never has there been a film that spoke to the heart of an artist like “Loving Vincent”. Animation and fine art painting come together in this loving tribute to the work and life of a master artist” ~ Shanghai International Film Festival Jury 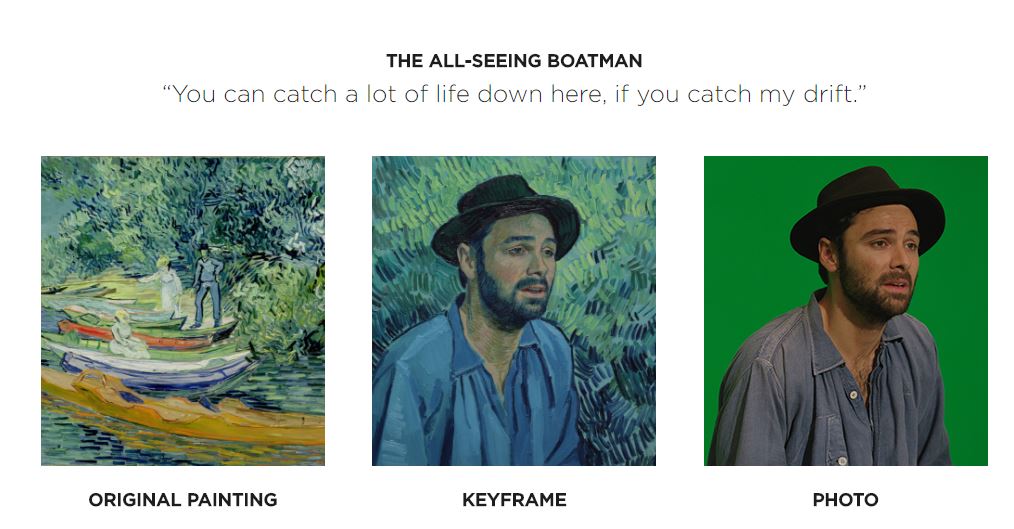 In our Gallery:Loving Vincent Album

Over 62,000 oil paintings and a cast including Chris O’Dowd and Saoirse Ronan bring the story of Vincent Van Gogh’s life and death to the screen in the world’s first feature-length painted animation.

It sounds mad: inspired by a letter Vincent Van Gogh penned in the week before he died, in which he noted that “we cannot speak other than by our paintings”, Oscar-winning filmmaker Hugh Welchman (Peter and the Wolf) and Polish painter Dorota Kobiela decided to make a movie doing exactly that. Hiring an army of painters from across Europe, each trained in the Dutch master’s style, they set out to tell his story the way he himself would. Consequently, every single frame of the resulting film, Loving Vincent, is an oil painting (12 per second!); the noir-like detective plot is drawn from the artist’s many letters; and the cast – O’Dowd and Ronan alongside Douglas Booth, Helen McCrory, Aidan Turner and more, with music by Clint Mansell – were chosen based on their likeness to real-life characters in Van Gogh’s works.

But the results, accordingly, speak for themselves. A truly astonishing visual feast, Loving Vincent demands to be seen on the biggest of screens.

“Tears up the rule book of animation … I’ve not experienced anything like it before.” – The TelegraphSource: MIFF Program

“Over 120 of van Gogh’s beloved paintings are the source material for the film, whose plot was constructed from over 800 handwritten letters by the artist himself. The comprehensive filming process begins with actors performing scenes in front of green screens or sets specially designed to look like van Gogh paintings.”

ANNECY, France — Edward Noeltner’s L.A. and Paris-based based Cinema Management Group (CMG) has added more key territories to the already fulsomely-sold “Loving Vincent,” a portrait of Vincent Van Gogh, in the run-up to the high-profile animated feature’s world premiere on June 13 at Annecy.

In the most recent licensing pacts, Altitude Film Entertainment has acquired the U.K. and Madman Entertainment rights to Australia and New Zealand. Latest territories to be sold on “Loving Vincent” also include Bulgaria, to A-Plus Films, Romania, to Ultraviolet, Turkey to Medyavizion and South Africa to AAA Entertainment.

At Cannes, worldwide sales agent CMG closed the U.S. and English-speaking Canada with Good Deed Entertainment along with Germany and Austria to Weltkino Filmverleih.

“Loving Vincent” hit the headlines from the get-go when, talked up as the world’s first fully-painted feature film, the enormity of its production challenge became clear with the film being first shot as a live action film with actors and a green screen and then saw 125 professional oil painters painting the picture frame by frame, producing 65,000 oil paintings in the style of Van Gogh. Entire production took four years.

With the film’s viral teaser trailer viewed by nearly 2.6m views on YouTube and receiving over 200 million views on Facebook, “Loving Vincent’s” unusualness of production approach offers obvious marketing hooks for distributors, some of which will play out at Annecy itself after the world premiere. Special events include painters animating Van Gogh’s Wheatfield with Crows on a wall in front of Lake Annecy and head of painting Piotr Dominak animating Van Gogh’s Le Moulin de la Galette live inside a Painting Animation Workstation – including a chance for Festival attendees to win the final painting.

Written by Kobiela and Welchman, rather than a conventional bio, the film is cast as a suicide mystery in which a young man, played by Douglas Booth, takes on the mission of discovering why Van Gogh shot himself in the stomach in 1891 despite impending artistic success, conducting fictional interviews with the subjects of many of Van Gogh’s final paintings. That, as much as his genius, is a question which has exercised generations of art lovers, probing the nature of artistic genius and inspiration.

“Loving Vincent” is a Polish/U.K. co-production backed by the Lower Silesian Film Fund, the City of Wroclaw and Centrum Technologii Audiowizualnych. Further financial support for the project was provided by Silver Reel, Sevenex Capital Partners and the Doha Film Institute.