In our Gallery: Secret Scripture Album 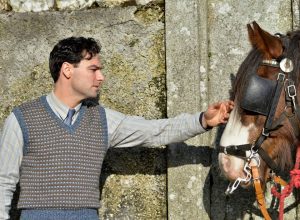 It focuses on Rose McNulty (Redgrave /Rooney) who has spent half a century institutionalized and has developed a special connection with Dr. Grene (Bana), whose determination to discover her past and set her free drives the narrative.


News Concerning US Release Date:
Jan 2016: “The film is currently in the final stages of post-production and is expected to be completed soon. However its US distributor Relativity Media is currently subject to Chapter 11 bankruptcy, meaning that the US release date is uncertain. Under their proposed restructuring deal the film would be released on December 31st, 2017. Voltage Pictures are the sales agent for other regions, meaning that we could get the film earlier.”

Feb 2016: ” Relativity Media returned to court Wednesday in its long-running battle to win approval of its exit from bankruptcy”
“The company still had not presented proof of those arrangements, which U.S. Bankruptcy Court Judge Michael Wiles has said he wanted to see before allowing Relativity’s emergence from bankruptcy to become effective.”

May 2017: “In a hearing this morning in New York bankruptcy court, arguments were heard whether to proceed with moving from Chapter 11 to Chapter 7 (liquidation). The result: A new hearing was set for August after lawyers for Ryan Kavanaugh said that there were prospects of possible equity investors and they were also anticipating monies coming from the Netflix deal on two films.”