Michael Grandage Company’s production Page:  Behind the Scenes of The Lieutenant of Inishmore 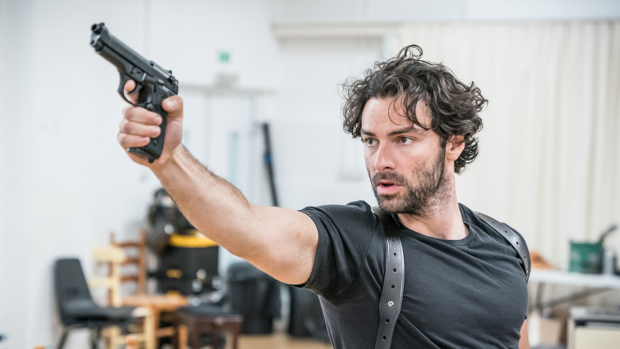 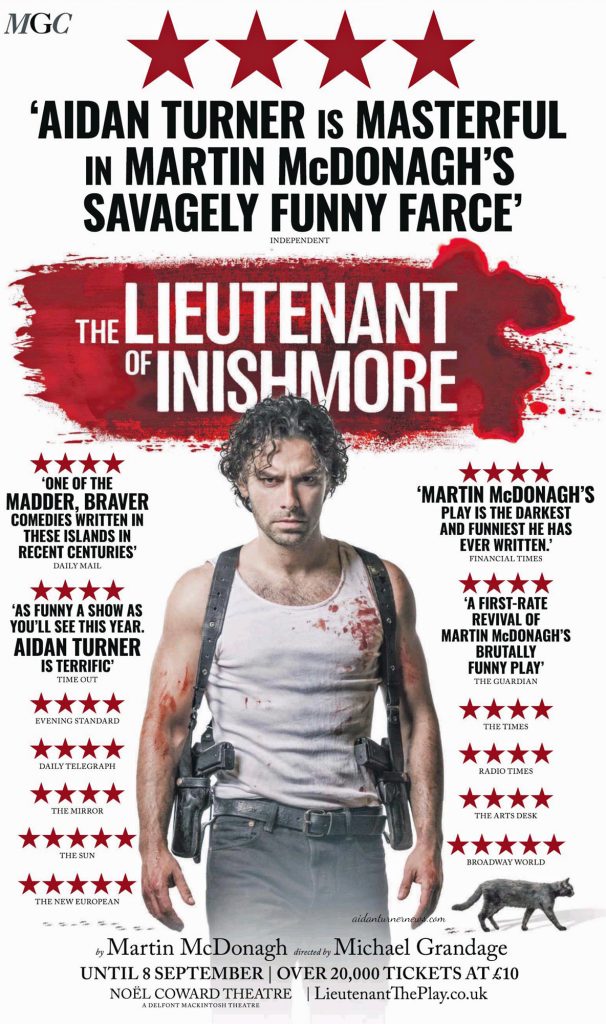 MGC Artistic Director Michael Grandage directs a rare revival of Martin McDonagh’s critically acclaimed, brilliant satire on terrorism, THE LIEUTENANT OF INISHMORE. Stage and screen actor Aidan Turner, best known for playing the title role in the BBC hit series Poldark, plays Mad Padraic, a terrorist deemed too violent to be a member of the IRA, in this hilarious, acute observation of violence in contemporary culture.

Who knocked Mad Padraic’s cat over on a lonely road on the island of Inishmore and was it an accident? He’ll want to know when he gets back from a stint of torture and chip-shop bombing in Northern Ireland: he loves that cat more than life itself.

This production follows Michael Grandage’s award-winning production of McDonagh’s The Cripple of Inishmaan in 2013.

MGC also present RED by John Logan, at Wyndham’s Theatre from 4th May 2018.

“The lieutenant of the occasion is Aidan Turner, whose popularity courtesy of the television series Poldark has attracted full and enthusiastic houses. (The 20-somethings around me had never seen a play before, and I’d have to imagine they left thinking that if theater is this exciting, they’ll sure come back for more.) Not being a viewer of Poldark or the Hobbit trilogy (in which he played Kíli), Turner is new to me. He is very good as Padraic, the Irish National Liberation Army soldier who is “too mad” for the IRA. And for the INLA, too. With a big smile, an impressive (if perennially blood-splattered) physique, and a mighty good sense of the ridiculous, Turner is wonderful as the sadistic assassin who—through it all—pines for his beloved Wee Thomas. His cat, that is. The sight of Turner sitting on the belly of a freshly and gruesomely-disposed corpse, lovingly cradling the carcass of his headless feline, is gruesomely tender.”
Read the full review here: THE LIEUTENANT OF INISHMORE AND THE KING AND I, BOTH IN BRILLIANT FORM: FROM LONDON

The Lieutenant of Inishmore’s Chris Walley on Working with Poldark’s Aidan Turner & Making a Splashy Debut
Were you as pleased as so many of us were to discover that Turner has genuine theatrical chops and is not just a TV heartthrob?
That was apparent even in the readthrough: Aidan is an incredible, incredible actor. He makes it look so easy that you forget how hard his job is; here he is playing this psychopathic character with so many redeemable traits that you can’t help but love the man.

Denis Conroy Interview: ‘We’re all going to take our shirts off …except Aidan!

Even by Martin McDonagh’s standards this is a really bloody play but it is also very funny. Does it lessen the horror if played as farce and isn’t there a risk that Aidan Turner’s Poldark audience from the telly might be taken unawares?
“It is not easy. The challenge for us is that this is a play about violence, Irish violence, Irish terrorists and the stupidity of it but what we have to do is play it for real but at the same time let the audience know that they can laugh, laugh their hearts out. We have to let them in without making it farcical so it is farce but not farcical. That’s the hard part.

“So this lunatic alpha male, all bravado, falls to pieces…over a cat.”

Its bonkers, like, but it is funny, very funny. McDonagh is very funny. Sometimes in rehearsal I have to say ‘It’s too dark lads, we have to let them in.’ That is the challenge, really.

“Aidan is the main character, he is the madman, away abroad, bombing chip shops because they are easier to bomb than an army barracks and he has left his beloved cat with his father.

“The play opens and the cat is dead, a car has supposedly knocked it down but actually it has been shot. The father has to call the son and the son comes home for the cat and all hell breaks loose. When he gets the message he is torturing drug dealers, who have sold cannabis to Catholics but it is all right for them to sell it to Protestants, madness.

“Aidan is playing a character totally different to the guy in Poldark and, firstly, that is good for them and if it brings people to the theatre who would not normally go to the theatre it is only a good thing because a percentage of them will come back.

“The other thing is – he is Irish, he is a good actor and he is perfect for the part, so there is nothing cynical about it and any actor worth their salt will tell you, particularly if they have come from a theatre background as most Irish actors do, is that they love to go back to theatre when they come off the back of a big film or TV success.” 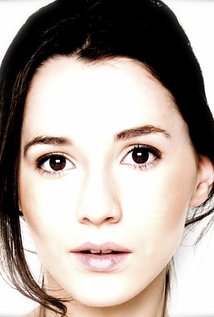 Actress Charlie Murphy has been cast as “Mairead” opposite Aidan Turner in “The Lieutenant of Inishmore”.

Charlie Murphy studied at the Gaiety School of Acting in Dublin, Ireland from 2006-2008.
Murphy won the 2013 Irish Film and Television Award for ‘Best TV Actress’ for her role in “Love/Hate”.

Charlotte “Charlie” Murphy (born 1 December 1988) is an Irish actress.[1] She is best known for playing the lead role of Siobhán Delaney in the hit RTÉ drama Love/Hate for which she won the 2013 Irish Film and Television Award for Best TV Actress,[2] and as Ann Gallagher in the acclaimed BBC One drama Happy Valley. She is currently appearing in the BBC One historical crime drama television series Peaky Blinders.